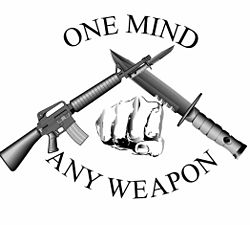 DISCLAIMER- A firm grasp of the following is essential for this article to be properly understood: The course decribed is an Instructor’s Course, i.e. it qualifies you as an instructor. THERE IS NO BELT LEVEL ATTACHED TO THIS! It is commonly refered to as a “green belt instructor course” only because %99.999 of the Marine Corps (MAI’s excluded) are too retarded to understand the previous few sentences. Now that that’s out of the way…proceed…

Ask anyone who’s been to Thailand recently about Marines’ skill at bar fighting and usually you get the same response.

“Couple of Jaeger-Bombs into the night and that Jack-ass went and picked on some little 110lb Thai kid at the bar. Thai kid ended up kneeing that Devil Dog’s teeth clear to the back of his head after giving him 5 or so dead leg kicks.” Priceless!

When I think of Marines and our ability to, shall we say stretch the truth, I am forever amazed at the magnitude of those who fancy themselves to have PhD in “Bad-assery” and think that they can fight with anyone and win by knockout. It would seem that by sheer Osmosis they have gained an undefeated professional fighting career simply by watching all 900 UFCs at the local TGI Friday. I wish I was making that up.

Flash scene to Parris Island and the fog draped bricks of Leatherneck Square where I experienced my MAI Course back in 2008. Standing at this building and staring at the large black and red flag that reads, “One Mind Any Weapon,” it becomes abundantly clear that something intense is about to happen. You’d be right, because your first opportunity to prove your worth is to take a PFT and score no lower than a first class. Sounds easy. Just remember that there are as many different places to take an MAI course as there are units in the Marine Corps. Each unit has its own PFT and some of them are just flat out awful in every way.

There are three distinct portions of the Martial Arts Instructors Course. Mental, Physical and Character discipline. Each of these partners with the Marine Corps core values and provides for what we lovingly know to be the synergy of MCMAP. We learn that there are five  belt levels (Tan, Grey, Green, Brown, and Black) followed by two instructor levels (MAI and MAIT). One must be a Green Belt to qualify as an instructor or a Black Belt 1st Degree (after having first qualified as any level instructor) to become an MAIT. On your long road to becoming an MAI you will begin by learning the history of the Marine Corps Martial Arts Program. Where we all came from as Martial Artists, the evolution of Marine Corps fighting programs of many shapes as sizes, and where we are now within the program itself.

Let’s get into the techniques, shall we? Of course we shall. This comprises the Physical Discipline of the Marine Corps Martial Arts Program. Anything you can do with your hands, feet, elbows, knees, knife, and other weapon of your choosing is a part of the Physical Discipline. At a minimum you’re already a grey belt (second level of five ) so that by the time you graduate you’ll be brought up to the Green Belt (third level). You’ll earn all of your credited hours toward Green Belt throughout the course. If you happen to be higher than Grey when you show up you will simply leave at whatever belt you came but now you’ll have an instructor’s certification to wear. Remember my disclaimer? Of course you do. You’re not retarded.

Grappling, body sparring and free sparring drills are within the physical discipline of MCMAP. You must engage one of your IT’s first, but then you will move on to fighting each and every one of your students. Sometimes you’ll engage one fight out of ten, other times you’ll fight the entire class one right after another. The point is to get you into the midset of engaging different opponents. You will learn to identify weakness and strength in certain areas and exploit them each accordingly. Grappling takes place on the ground, body sparring is standing with punches to the body only, and free sparring is standing with punches, kicks, elbows and knees. They are each punishing in their own way. Bcoming comfortable within all three is absolutely neccesary to be a great instructor.

The Mental Discipline of MCMAP is taught in the classroom. So wherever you take the course you will eventually be given student materials and have to read quite a bit. We learn basics of Anatomy and Physiology, nutrition, wellness, and a smattering of administrative topics. You must study the actual methods of instruction. We use a unique type of instruction called “EDIP” which appeals to all three different types of learners (audio, visual, tactile). Safeties are mentioned several million times in this portion because, like any form of martial arts, injuries can and do sometimes happen. That is no excuse for not having proper precautions tho. Why make it easy to get hurt right? If you’re hurt you can’t train, and if you can’t train the Thai kid will destoy your lilly ass in Round Two.

Character Discipline is the third portion of the course. Becoming an effective instructor means that you must be of sound character. Consider this: Youve just begun a grappling match with a student. This student has previously taken 10 years of Judo and proceeds to tap you out in under 5 seconds. You have two options. First, you can get rediculously angry and headbut that student directly in his face while kicking him in the shins and leading into what may only be described as a gooch punt. Second, and this is my suggestion, you could congratulate the kid on a great tap and ask him to show you the technique he used. Call the class over to see it also, because it may help them out in their own grappling game. Which of these two options requires more character discipline? The second one right? If you said the first, this article is clearly not for you. Please send me your address so I may dispatch my flying torque wrench weilding monkey’s to your place of residence.

So far everything I’ve mentioned sounds awesome, doesn’t it? Hell yeah it does! But I can hear you asking yourself how it all comes together. I mentioned synergy, therefor something must be working with something else to a mutually advantageous end. Indeed, something is.

There is a wide variety of physical drills you will endure during your course. Some are as short as an hour, some might take the better part of 4-5 hours. Durring this time you will be worked to the point of exhaustion and challenged to witness the depth of your drive and determination. At the end of each of these exercises a topic will be discussed while you are at your physical minimum. We call these, “Tie-ins,” because they tie in with the physical lesson you just completed. It might be suicide prevention, drug abuse, sexual harassment, safety in martial arts or any of a long list of topics. They are designed to make you think deeper about your role as an instructor. You are not just someone who can tell a Marine how to fight. You must SHOW them how to fight. You may very well find yourself, as I have, helping a fellow Marine out of drug addiction. You are many things to many people, and Tie-ins help make you the ideal of what a Marine is and should be.

As we conclude the drills there is one more tool used to round you out as a soon to be Martial Arts Instructor. Warrior Case Studies bring it all home. You will find a warrior, of any branch of service, and study their award citation. The battle itself, and what made it so unique as to merrit an award are a few of the key points to focus on when giving a case study. I’ll tell you now, you’ll feel differently about it after having just finished a physically taxing drill. Nothing helps you understand a Navy Cross Citiation quite like a 7 mile hump thru driving rain, low crawling thru mud with barbed wire overhead, and sparring all the while…voice of experience.

After 21 Days you will be finished. The day before last is your final exam consisting of a Green Belt test, a test over your instruction, and a test over the quality of your tie-ins/warrior case study. After passing all three tests all that remains is for you to graduate on day 21. You will have earned it. Parts of you will hurt like they never have before, but you will be better for it and glad you did it.

The Marine Corps Martial Arts Program is an ever changing institution. As with any art form certain aspects are adapted and molded to fit whatever need be. Please know that I left out some of the details in this article on purpose. First because I don’t want to ruine the surprise, and second because things change so rapidly that what I write now would need to be updated too often to be useful. Take what I have written and use it as a guide to the program in order to further your understanding of MCMAP.